Politicians running for or holding elected office on a federal, state and local level often must file financial disclosure statements detailing their personal finances and business interests. These include information about their sources of income, investments they have, property they own, businesses in which they have a position or interest, and gifts and honorariums they have received.

The disclosures are required to avoid conflicts of interest by public office holders and so the public can determine if a politician’s personal financial interests might be affecting his or her actions as a public official.

In California these forms are called statements of economic interests and are required for anyone running for or holding either a state elected office or a local office such as a city council, school board or board of supervisors.

Members of the U.S. House of Representatives and the U.S. Senate must file annual disclosure reports about their finances. Candidates for these offices also must file the reports.

The president and vice president, top members of the executive branch such as department secretaries and undersecretaries, and justices of the U.S. Supreme Court and other federal judges also must file the forms.

What’s in the Forms

See Open Secrets’ About the Reporting Requirements for details on what must be reported.

Where the Forms are Filed

The forms for the justices of the U.S. Supreme Court and other federal judges are filed with the Administrative Office of the United States Courts.

Here’s a sample page from one of President Barack Obama’s financial disclosure forms: 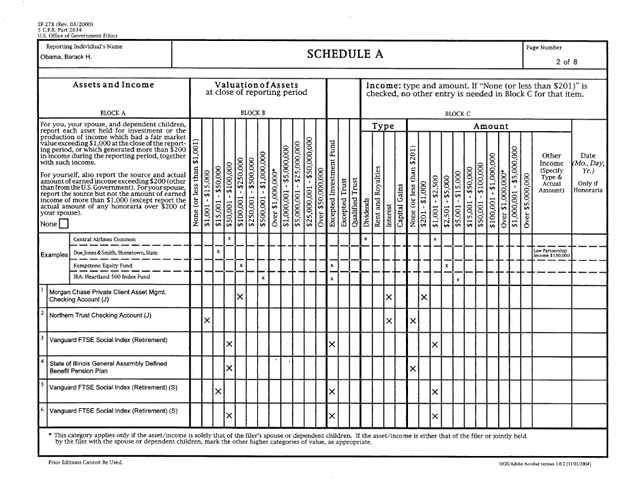 Many of the federal financial disclosure statements are available online at government or government watchdog sites.

Search by name of a representative to get a copy of their financial disclosure statement in .pdf format.

Search by name of a senator to get a copy of their financial disclosure statement in .pdf format.

The official presidential Whitehouse.gov site has the financial disclosure forms for the president and vice president available in pdf format.

Copies of financial disclosure statements for executive branch officials can be requested from the White House press office using an online form. The forms are sent via email.

Supreme Court and Other Federal Courts

But they are available at the Open Secrets website.

For other federal judges, such as appeals court or district court judges, you can request copies of their financial disclosure forms from the Administrative Office of the United States Courts using an online form.

The Open Secrets website, run by the Center for Responsive Politics, has copies of the financial disclosure reports for members of the U.S. House and Senate, the president and vice president, top executive branch officials and U.S. Supreme Court justices.

Many states have laws requiring public officials to file financial disclosure statements. They are often filed with a Secretary of State’s Office or a state ethics commission.

You can check the websites for Secretaries of State or ethics commissions to see if financial disclosure statements have been posted online.

The Federal Election Commission has a directory of websites of Secretaries of State, ethics commissions and other agencies in each state that regulate reporting of financial information by public officials.

All state and local public officials and all candidates for public office in California must file a Statement of Economic Interests, also known as a Form 700.

Public officials include all elected officials as well as top appointed officials of any state executive agency or local government agency, such as a city manager, county administrator, director of an agency, department heads, members of appointed commissions and boards that make policy decisions and judges. 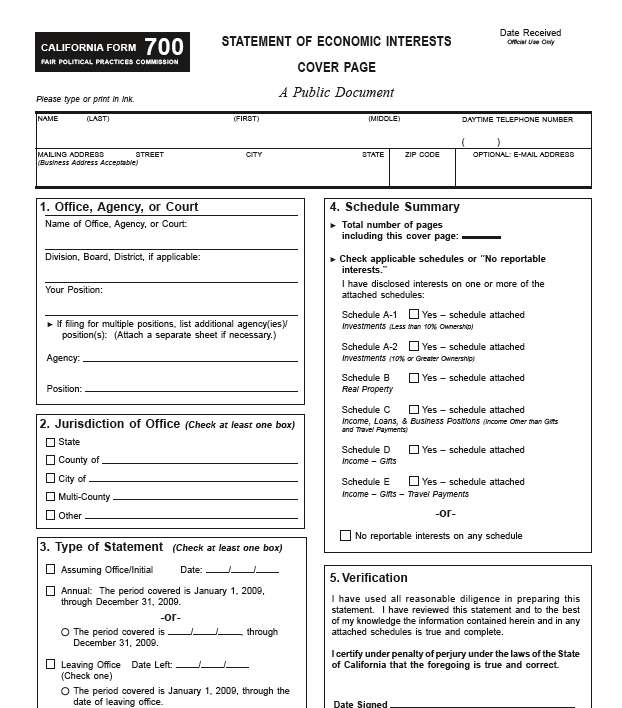 What’s in the Forms

To clarify the last item about disclosure of sources of income to a business, here’s an example:

If a public official is a 50-50 partner in a law firm with one other person, and the law firm has a client that pays the firm $20,000, then that client must be disclosed by the public official because the official’s share of income from the client was $10,000.

If the client had paid the law firm only $19,000, no disclosure would be required because the public official’s share is only $9,500 – less than the $10,000 threshold required for disclosure.

Here’s the form 700 page for reporting business investments and income: 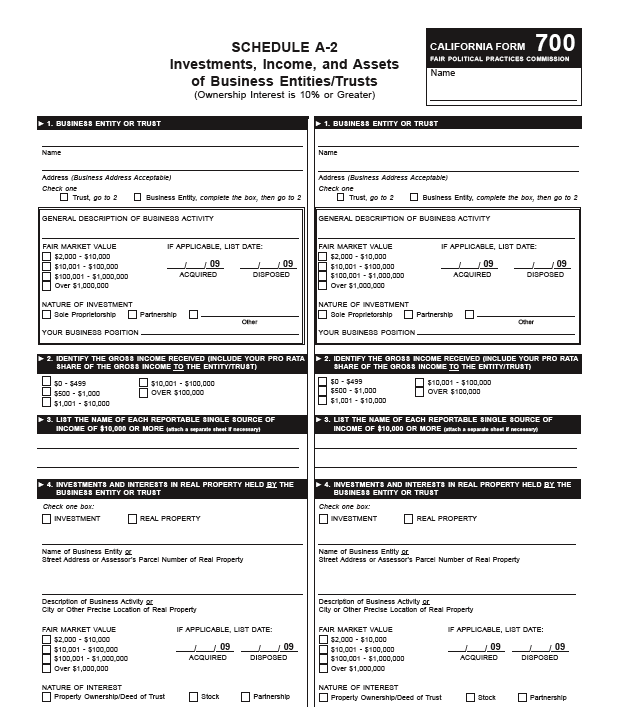 For more information on what must be disclosed, you can download a sample Form 700 and a Reference Pamphlet from the California Fair Political Practices Commission Form 700 web page. These have detailed instructions on what must be reported on the form.

When the Forms are Filed

The financial disclosure forms are filed annually, either in March or April depending on the type of office held by the public official.

New candidates for elected office also file the forms when they submit their candidacy papers to be listed on the election ballot.

Where the Forms are Filed

Financial disclosure forms filed by local officials usually are kept by the clerk for the agency for which the official works, such as the city clerk or county clerk.

Copies of the filings by local elected officials, judges and top administrators at local agencies, in particular those who manage public investments, also are kept by the California Fair Political Practices Commission in Sacramento.

Members of the state Legislature and state-wide office holders, such as the governor, attorney general, secretary of state, etc., file their financial disclosure forms with the California Fair Political Practices Commission in Sacramento.

The forms also also filed with local agencies, some of which make the forms available online.

The FPPC also puts online “behest payments” – donations organizations make to other organizations at the behest of state Asssembly, Senate or statewide elected officials to be used for legislative, governmental or charitable purposes.

The FPPC in September 2010 enacted a rule requiring that free tickets to sporting events, concerts or other entertainment events provided to people or organizations must be publicly disclosed. The disclosure forms (called 802 forms) are posted on the FPPC’s website:

Bay Area City Council Members and County Board of Supervisors

The California Fair Political Practices Commission in 2010 began putting the statements of economic interests/form 700s for members of county boards of supervisors and city councils in a:

Note: on your browser you’ll probably need to delete the cookie for the site nf4.netfile.com (which hosts the disclosure statements for many cities) in order to view the forms for the different cities listed below.

The City of Berkeley posts copies of statements of economic interests for many of its officials in searchable database:

Note: on your browser you’ll probably need to delete the cookie for the site nf4.netfile.com (which hosts the disclosure statements for many cities) in order to view the forms for Berkeley.

The Oakland Public Ethics Commission has a link to a searchable database for statements of economic interest filed by city officials:

Then click on the link for Public Portal to Search & View Oakland City Officials’ Form 700.

Note: on your browser you’ll probably need to delete the cookie for the site nf4.netfile.com (which hosts the disclosure statements for many cities) in order to view the forms for Oakland.

The Richmond City Clerk has a website on which statements of economic interests for the city council members are filed:

The San Francisco Elections Commission posts copies of statements of economic interests for public officials in San Francisco in a searchable database:

Note: on your browser you’ll probably need to delete the cookie for the site nf4.netfile.com (which hosts the disclosure statements for many cities) in order to view the forms for San Francisco.

The City Clerk for San Jose posts statements of economic interests for its officials in a searchable database:

Note: on your browser you’ll probably need to delete the cookie for the site nf4.netfile.com (which hosts the disclosure statements for many cities) in order to view the forms for San Jose.

Copyright UC Berkeley Graduate School of Journalism . Any code samples in these tutorials are provided under the MIT License

The above copyright notice and this permission notice shall be included in all copies or substantial portions of the Software.

THIS PAGE IS PROVIDED "AS IS", WITHOUT WARRANTY OF ANY KIND, EXPRESS OR IMPLIED, INCLUDING BUT NOT LIMITED TO THE WARRANTIES OF MERCHANTABILITY, FITNESS FOR A PARTICULAR PURPOSE AND NONINFRINGEMENT. IN NO EVENT SHALL THE AUTHORS OR COPYRIGHT HOLDERS BE LIABLE FOR ANY CLAIM, DAMAGES OR OTHER LIABILITY, WHETHER IN AN ACTION OF CONTRACT, TORT OR OTHERWISE, ARISING FROM, OUT OF OR IN CONNECTION WITH THE INFORMATION IN THIS PAGE OR THE USE OR OTHER DEALINGS IN THIS INFORMATION.