To make a map in D3, we must first start with a file that has cartographic information. We can then convert this for use in D3 or other software tools. Some of the most common formats of cartographic data files:

Before we begin, it’s also important to understand how map projections work. Projections is the cartographic science of taking a 3D shape, like a sphere, and representing it as a 2D plane surface.

D3 offers several choices for how to display map projections.

The first steps in the process is to convert our cartographic data as a topojson. This is the format most ideal with D3 and will give us the best results. The process will vary depending on what you start with. In most cases, using the tools shown in this page will work with different starting files.

The goal is to convert the file to an EPSG:4326 coordinate system, or verify that it is already set to this. This will use standard latitude and longitude coordinates for all the points in your shape.

Step 1: Starting with a Shapefile

In this example, we will start with a shapefile of election precincts in Contra Costa County, California. Most shapefiles are available for download on the websites of local government agencies. This one was provided by the elections office of Contra Costa County.

Optional: Viewing the file in Mapshaper.org

We can view the file in MapShaper. This process is just informational, so we can see what it looks like. Clicking the “i” icon and hovering over the various features of the map helps us understand the type of data associated with each feature. 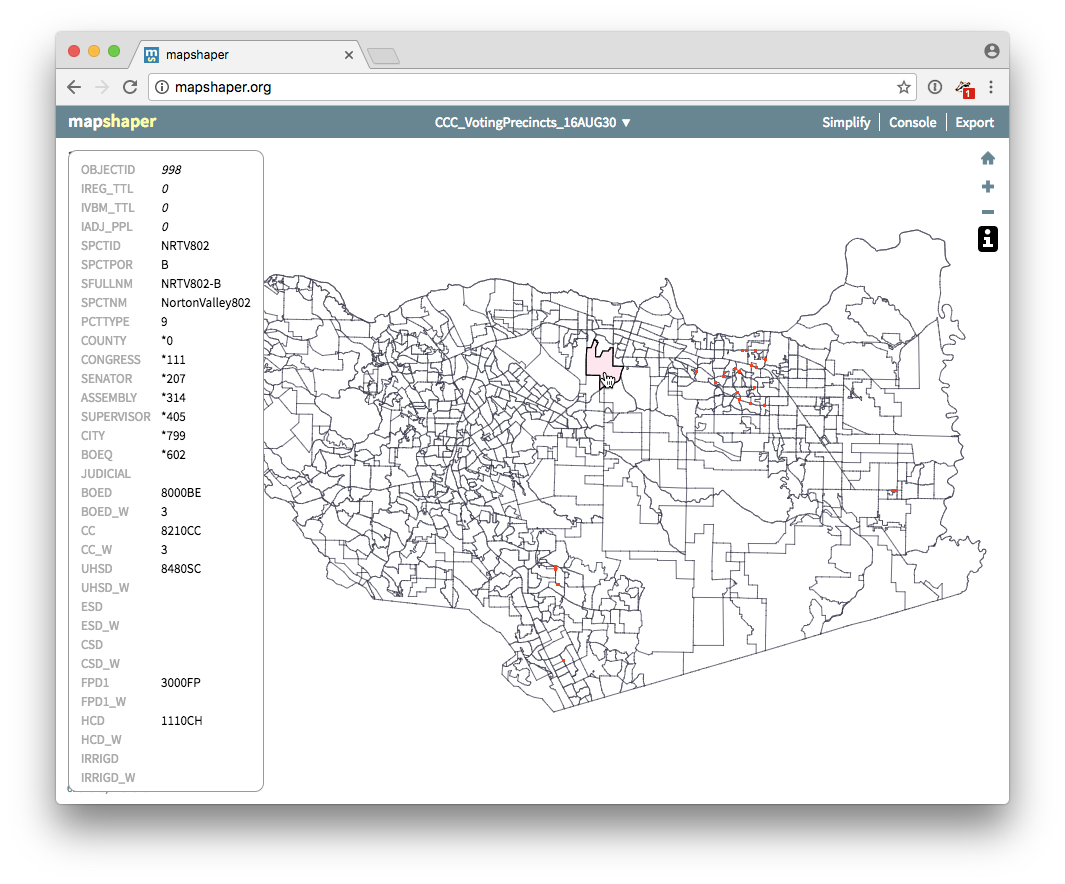 Note: Mapshaper has the ability to export files as GeoJSON and TopoJSON. Sometimes this would be OK to perform at this time. But in our example, we won’t use MapShaper to do this right now, because our shapefile is in a different coordinate system other than EPSG:4326. We need to first convert it before exporting as TopoJSON!

Shapefiles have a coordinate system embedded in them. You can think of this like an Cartesian X and Y grid, but where the values have different meaning depending on the type of map and where you got your shapefile.

D3 likes EPSG:4326, because it uses a common latitude/longitude coordinate system. Some shapefiles might already be setup with EPSG:4326, so this step can be optional. 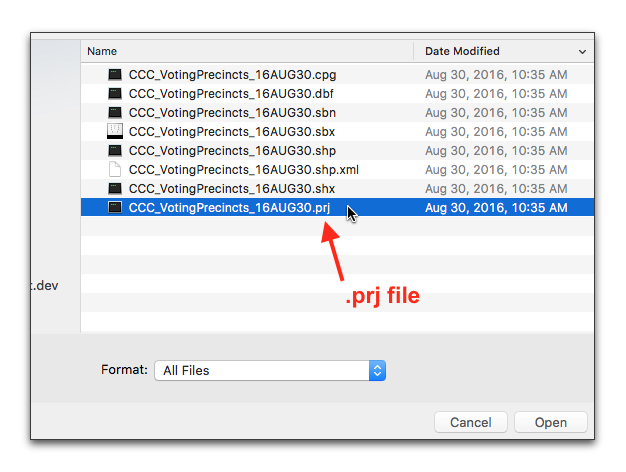 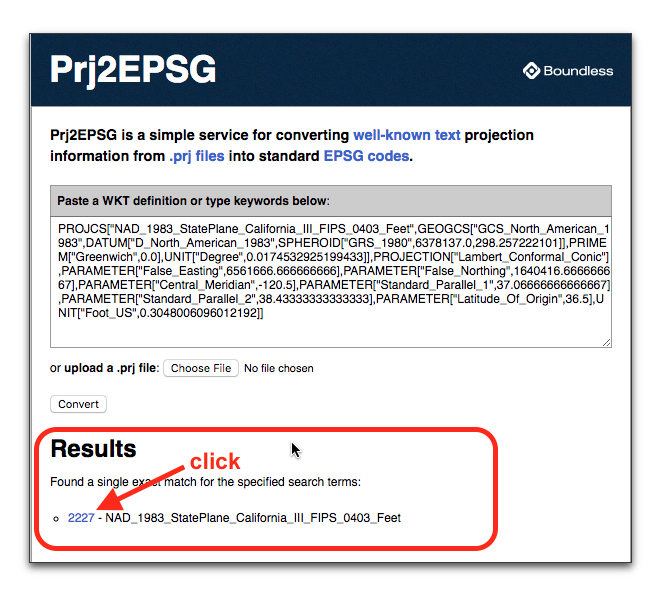 We can see from the results, our shape file is embedded with EPSG:2227 coordinates. We need to convert it from EPSG:2227 to EPSG:4326!

Next, we’ll visit the Ogre to Ogre (ogr2ogr) web client to convert our file to the correct EPSG:4326 coordinate system.

Ogr2ogr is a free command line program that can be installed though a package called GDAL, or through Homebrew.

However, there is an easier way using a free online web client and it doesn’t require installing anything. The web client should work for most applications. The drawback is that there are limited options for conversion, and there is a file size limit. Should either of these be an issue, then you’ll need to install ogr2ogr manually and run the following command from the Terminal program (You’ll need to do this from the folder where your shapefile is located.):

For everyone else using the web client version, just visit: ogre.adc4gis.com. You’ll need to upload the entire shapefile .zip file. 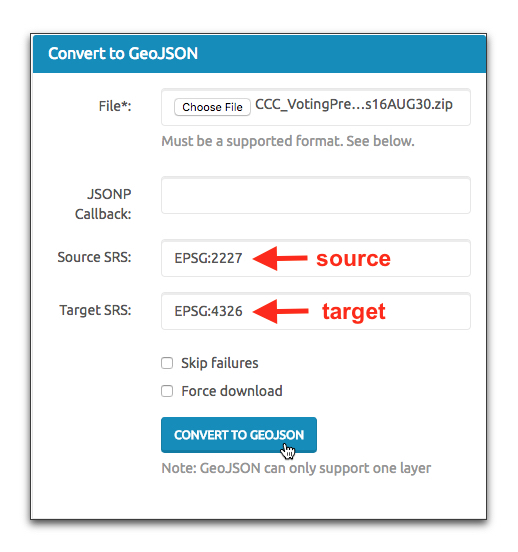 With some browsers like Chrome, it may output the GeoJSON file as text in your window. Simply press Command (Ctrl on PC) + S to save the file with a .json file extension. The name of the file will be used later, so make sure the file name has no spaces and is well understood. 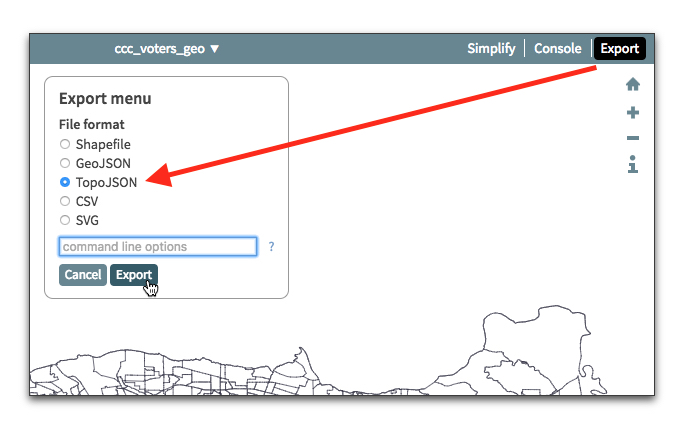 Advanced Users Note: If you already know the metadata you want to associate with each feature, you can add id-field= to the command line options during export and it will become the “id” property of each feature. In this current Contra Costa County Precinct, for example, we can put id-field=SPCTNM so that the SPCTNM field, which is the precinct name, will be associated with each feature’s id. Without doing this, all metadata will still be preserved.

Notice we’re loading in two D3 libraries; the main library, and one topojson sub-library. In the <script> tag, we’ll setup our basic SVG, and setup a path function which will draw our map.

The above code assumes that you named your TopoJSON file ccc_precinct_topo.json. Also, we need to figure out what the features object is in your data. If you followed this tutorial, Mapshaper would have made the object property name the same as the file name of your GeoJSON file (the one you exported from ogr2ogr). You can also find this out by looking at your console data, which we exported using console.log(mapData). 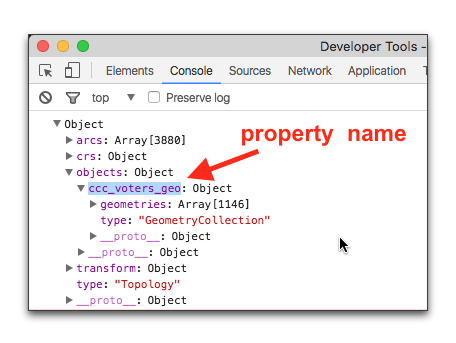 Note that in this example our property name is ccc_voters_geo (yours may be different). We need to use this in our data() function:

Change your mapData.object.[name of property] to match your console.

You should see a map appear: 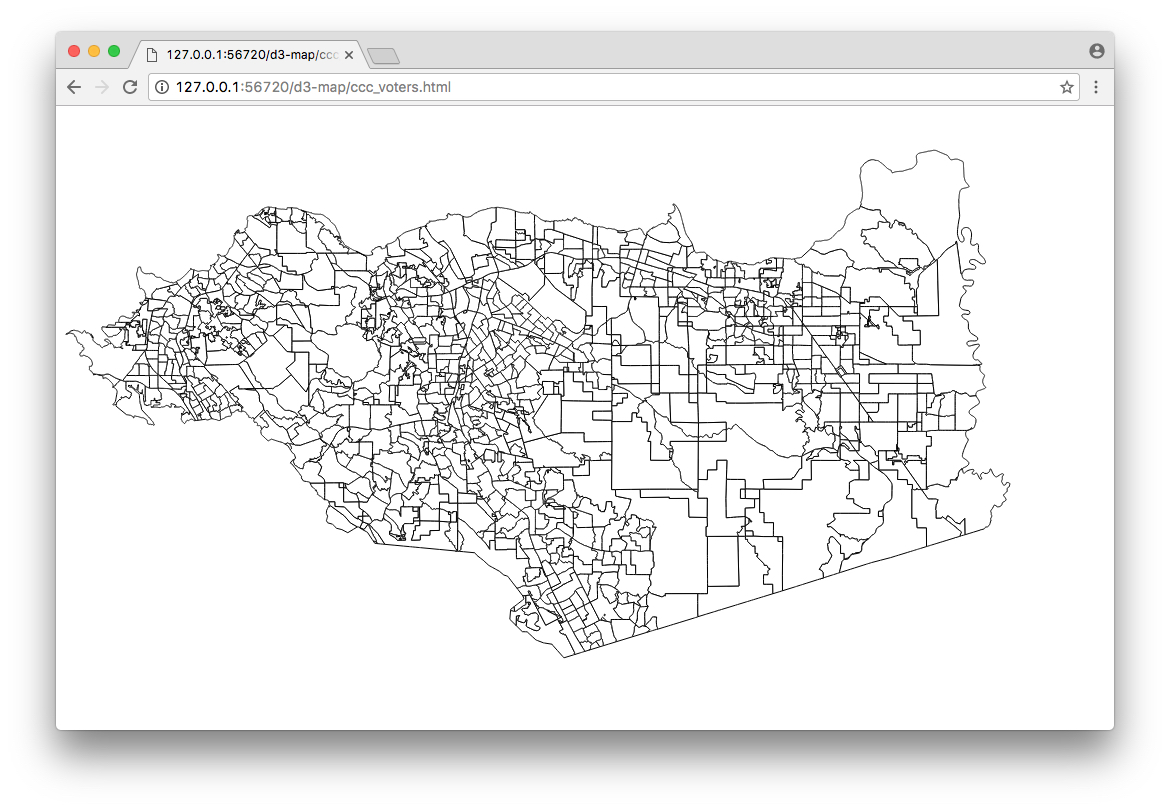 Step 6: Loading Other Data to Color the Map Features

Next, let’s load a .csv (spreadsheet data) so that we can color-code these precincts. We’ll use the latest election results from the 2016 primary elections.

Let’s make a map to find out who voted for Hillary Clinton vs Donald Trump. Open the election results in Excel, then we’ll create a new Spreadsheet document, and copy over just the columns we want to display on our map.

Sort just the data you need with precincts in one of the columns, and save as a .csv file.

Sometimes we need to load in multiple data files simultaneously. D3 has a separate utility called d3.queue() for doing just this. We first create a d3.queue() object, and then load in each file. We then specify a function, which will only be called once all of the previous files are loaded. This is important to use, because sometimes one file might take longer than another, and you want to ensure both are loaded before running the function.

Later, we put in the function that will be called once each of these is loaded:

In order to pair the data from our spreadsheet to the shapefiles, we’ll need a special object variable. D3 has something called d3.map() built just for this purpose. It’s a really simple function that allows you to create an object, and set the keyword for this object. In addition, there are some function for retrieving the data based on the keyword you set. Let’s look at an arbitrary example:

So, now that we generally understand how maps work, let’s use it in our example. We can use a special feature of d3.queue(), which will allow us to run a temporary intermediate function to do something to the data before our ready function is called.

What this does is allows us to recall either candidate’s results based on the precinct name.

Since some the shapefile data has precinct names associated with each shape, when we make our D3 map, we can reference this election_map variable to extract the voter data.